There is a local legend about how one of Hanoi’s most famous and special dishes was created. And the place to enjoy this particular cuisine is surely the very area where it is said to have originated. Welcome to Ngu Xa island and to Pho Cuon, a type of fresh spring roll, made famous on the island. 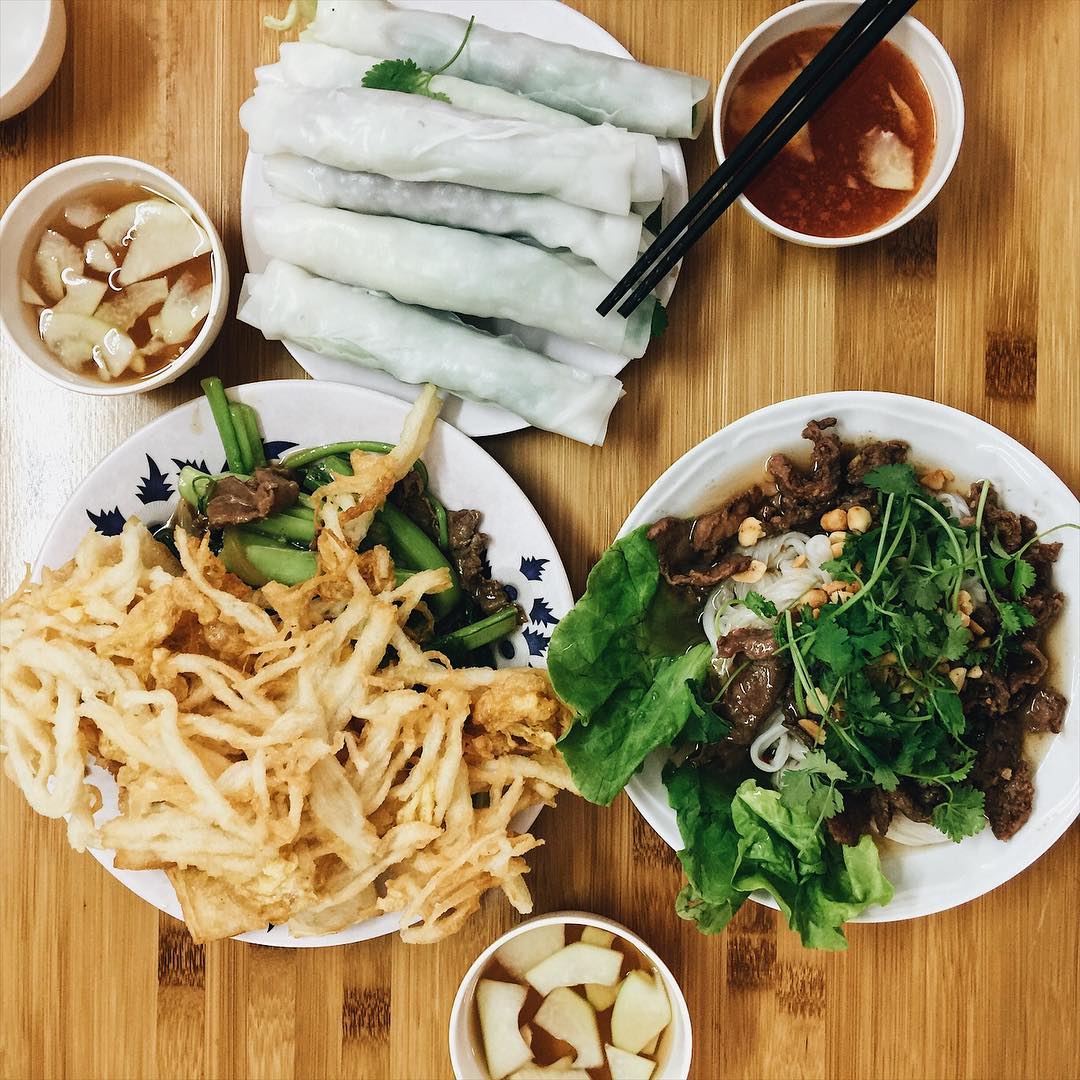 Ngu Xa protrudes into Truc Bach Lake and is connected to the mainland by two small streets.

The island’s name is derived from Sino-Vietnamese where ‘Ngu’ means the number five and ‘Xa’ means village. It relates to one village which was formed by bronze casting families from five communes around Hanoi who came together over 400 years ago. Bronze casting made the island famous and wealthy. However, this trade has long moved away due to health & safety reasons, lack of space and pollution. But the industry continues to flourish at casting workshops about 1 km away.

Meanwhile, since early 2000 Ngu Xa has become famous for something completely different. Bronze workshops have gone but a plethora of Pho Cuon restaurants now abound. 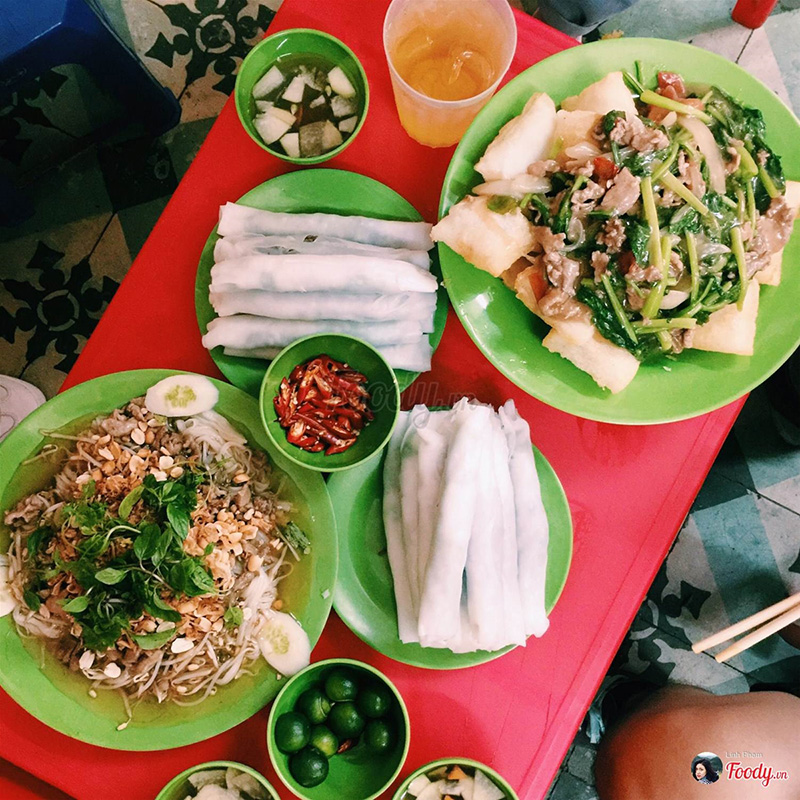 Pho Cuon is the island’s delicious specialty and a dish now unique to Hanoi. A type of fresh spring roll, it is made from soft cooked rice paper sheets, similar thickness as Pho noodle, wrapped around aromatic herbs, fried minced beef and pepper. Go to any restaurant in the vicinity and they will serve you Pho Cuon in stacks of 10 cold rolls per plate, served with a dipping sauce made from fish sauce, garlic, seasoning, sliced carrots, green papaya, rice vinegar, a little lime juice, sugar, garlic and chili.

And what of the legend? While the origins of Pho Cuon are shrouded in mystery, the island’s Mrs Chinh on Mac Dinh Street takes the credit for its invention. There are slight variations on her story, but a common one is that one evening about 14 years ago she had a hungry group of workers arrive at her café wanting Pho noodle soup. But she had run out of Pho broth. So thinking on her feet she quickly improvised in order to serve her customers. She made fresh rice rolls filled with the Pho ingredients. The creation was heartily devoured. It proved to be such a popular dish that one can assume from Mrs Chinh’s success, others copied until the island and the surrounding area are shoulder to shoulder full of Pho Cuon restaurants. 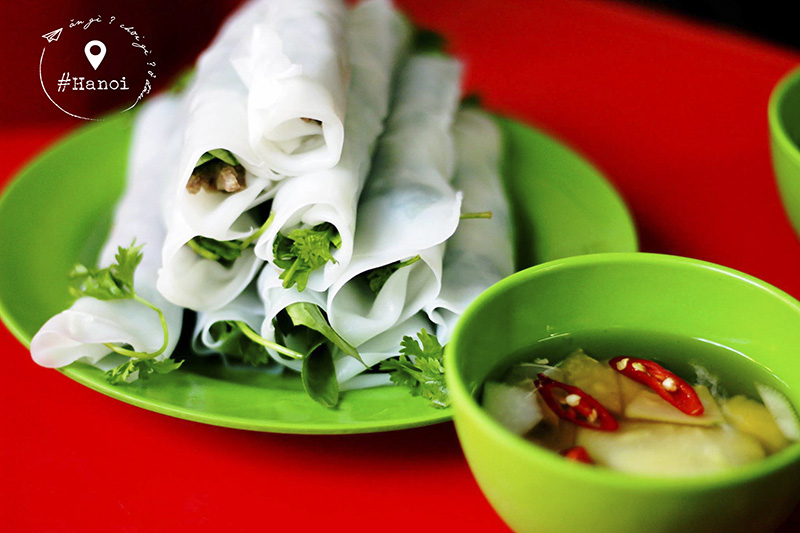 What makes it so delicious? Beef must be fried quickly, onion and garlic fried simply, with just the right amount of seasoning to guarantee the perfect taste. Pho Cuon is the ideal combination of meat and vegetables while being both fresh and healthy. It is best eaten with one’s hands and dipped into the sauce, no need for chopsticks. Although Pho Cuon arose from an adaption of Pho noodle soup ingredients without the broth, the taste of rolled Pho is very different to that of Pho noodle soup. Similar ingredients may be used – the noodles, beef, herbs and so on – but the combination gives a completely different taste and experience, partly for the way the meat is marinated and the fish sauce mixed.

Pho Cuon is a special choice and delight for Hanoi citizens and it can be argued that no other region can make Pho Cuon as good as that of Hanoi. 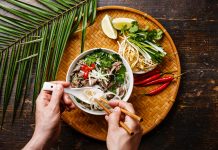 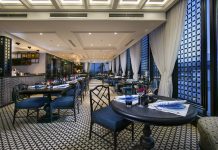